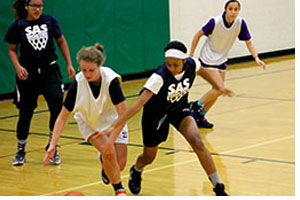 On Saturday, November 7th, the Lady Atoms played in the Marsh Madness Charity Tournament to benefit former Corcoran Cougars Coach, Jim Marsha, who is battling Cancer. There were 32 teams in attendance and it was a single game elimination tournament. The Lady Atoms defeated CBA in the first game and lost to CNS in the second round of play. Money raised from the event went to treatment costs and travel expenses to and from NYC for the former Coach, raising over $10,000! Imani Watts participated in the 3 point contest for the Lady Atoms and did very well. We are very proud of our girls for playing their hearts out for such a wonderful cause!