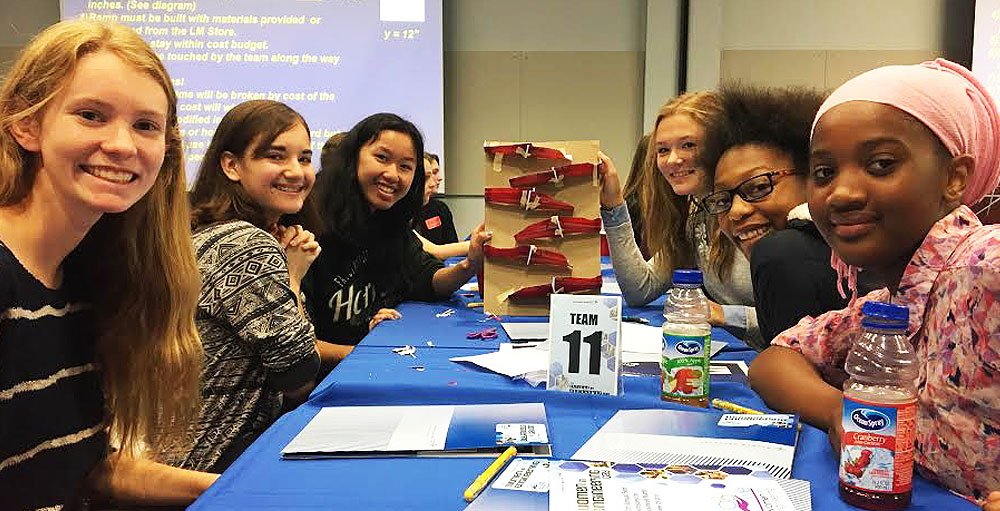 On Friday, October 28, 2016, two students from Syracuse Academy of Science's High School attended the Women in Engineering Day presented by Lockheed Martin. Ninth graders, Justine Bell and Priscilla Jones-Johnson were selected to attend the 16th Annual event at the site in Liverpool. The program included a morning engineering challenge which asked teams of students to design an apparatus that would move a ping pong ball down an inclined piece of cardboard at the slowest speed. The SAS students, working in a team with the students attending from Fayetteville-Manlius, won the contest with a time of 8 seconds, a full 3/4 of a second longer than the second place team! After the challenge, students got the chance to meet with engineers from Lockheed Martin that work in various fields from mechanical and electrical engineering to ceramic and software engineering, including having lunch with several of these women engineers. After lunch, the students were given a tour of parts of the facility and attended a career fair with hands on demonstrations of various forms of engineering so they could try their hand at becoming an engineer for part of the day. Many thanks to Lockheed Martin for putting on a great day at their facility and great job to our students on their engineering contest win!

Click here to see the pictures of "Women in Engineering" event