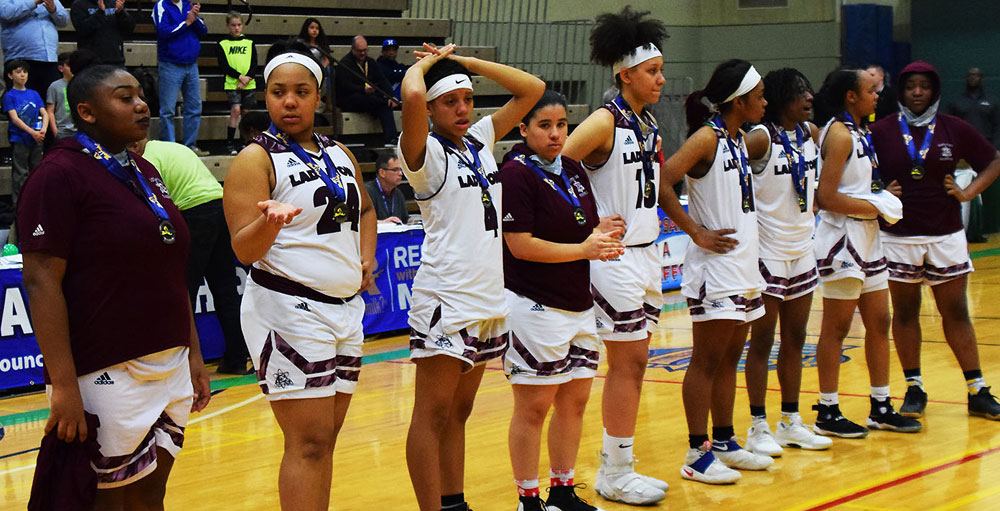 The #SASAtoms accomplished a lot - winning the program's first Section III title and advancing to the state final four.

SAS missed out on only one goal, as Section IX champion Millbrook bested the Atoms, 67-64, in overtime in the Class C state championship game at Hudson Valley Community College.

"We came up short, but we accomplished a whole lot," #SASCS coach Reggie Pickard said after his team came out on the short end of the 4-minute extra session, during which the Atoms led three times before surrendering the final four points. "Overtime game, we lost to a great team, a well-coached team."

SAS, who finish 19-5, lost despite a determined effort from senior Lyrik Jackson, who led the Atoms with 24 points and 15 rebounds, and junior Diamonne Harris, who added 23 points.

"She made a big difference," Pickard said.

Millbrook led the whole way, until there was just one minute left in regulation. A basket by Jackson tied the game at 54-54.

The Blazers pushed the lead back to four points with 34 seconds left, but SAS got a pair of free throws from Jackson to pull within two and 6-0 sophomore Erykah Pasha sent the game into overtime by converting two free throws with no time left on the clock after she was fouled on a put back attempt at the buzzer.

The Atoms led three times in the extra session - 60-59, 62-61 and 64-63 - before the Blazers got their final points from reserve junior forward Claire Martell, who hit a basket and two free throws in the final 45 seconds.

Pickard said he told his players to keep their heads high.

"I just told them they had no reason to hang their heads," said Pickard, who started the varsity program at SAS in 2010. "We set a goal at the beginning of the season. We reached our goal, but we just came up short."

Pickard said his all-state senior, Jackson, was all heart.

"She played hurt. She twisted her ankle early on. Her shoulder was still sore from the fall yesterday. She was banged up. But she gave it her all. She gave it her heart," he said.

The coach said he hoped the Atoms would be back, albeit probably in a higher classification. Nearly everyone associated with Section III basketball expects that SAS will be moved up in class by the competition committee.