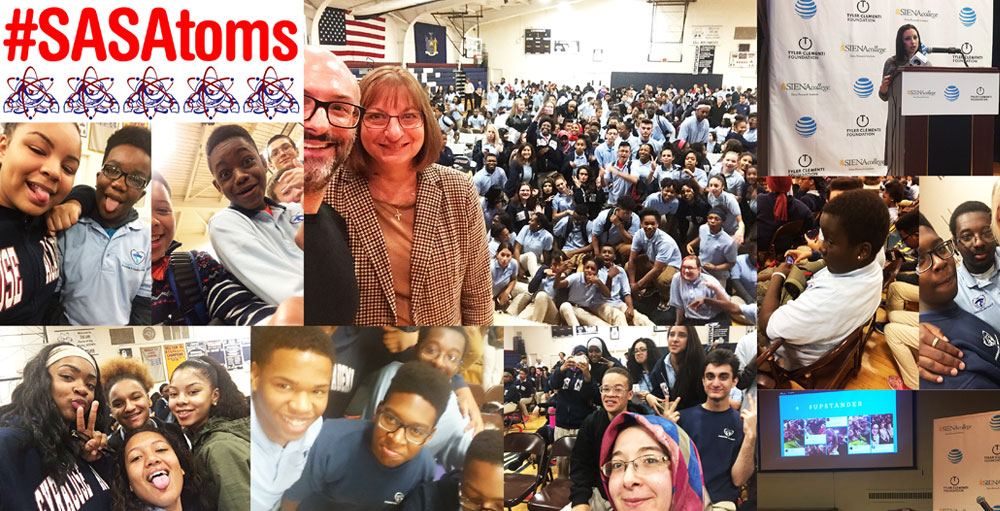 New anti-bullying campaign coming to a school near you

On Wednesday, high school students at Syracuse Academy of Science took a hard look at the impacts of cyber bullying through the eyes of peers across the country.

Teens watched a film created by students that will be shown in schools across the country starting February 2017.

The #Upstander campaign was created by AT&T and the Tyler Clementi Foundation, named after a bullied teen who took his own life.

"This is a national epidemic,” said Tyler’s mother, who founded the organization after her son. “We need to prevent this before it happens.”

One senior at the assembly tells NewsChannel 9 the video was a wake up call for her and hopes her peers feel the same way.

“A lot of us take cyber bullying as a joke,” said Claudi Garcia Maso, a senior at SAS. “These words impact these young teenagers.”

Article by News Channel 9 on http://www.localsyr.com/news/local-news/new-anti-bullying-campaign-coming-to-a-school-near-you

How is Cyberbullying Affecting Teens in Central New York?

It was an eye-opening message.

"I didn't know it was happening on such a large scale and was still happening,” said high school senior Claudia Garcia Maso.

"I never experienced the depth of it,” added Killiaun Blatche, another senior.

But 31 percent of Central New York teens do experience cyberbullying, according to a new Siena Research Poll.

"I think we need to take responsibility and ownership of that poor behavior and move forward from here,” said Jane Clementi, founder of the Tyler Clementi Foundation.

The Clementi Foundation and AT&T are taking those steps forward, launching a new initiative in schools nationwide. Students at the Syracuse Academy of Science had a chance to get a first look.

"I may not have been a cyberbully or someone causing the issues in someone else's life, [but] if I see it going on around me, I'm accountable of it by myself too,” Garcia Maso said.

As part of the campaign, leaders asked students to take to social media and pledge to be an "upstander," or a bystander who will stand up against cyberbullying. Just snap a selfie with the “upstander” hashtag and post away.

It's a message of hope that now has even more students ready to deliver.

"Your life is precious, and your life should not be based on what someone else thinks of you or wants to put into your head,” said Garcia Maso.

The campaign is visiting schools across New York State all week. They'll roll out the program nationwide in February.

Article by Gabrielle Lucivero on http://www.twcnews.com/nys/central-ny/news/2016/11/16/cyberbullying-initiative-in-cny.html

One-third of teenagers in the Central New York region are cyberbullied, according to a recent report.

Cyberbullying was the focus of a middle and high school assembly at Syracuse Academy of Science Wednesday. Students watched videos of peers who had been cyberbullied, heard from a mother whose son killed himself as a result of cyberbullying, and they took selfies to pledge they would stand up against attacks online.

The presenters, from the Tyler Clementi Foundation and AT&T, then revealed statistics about cyberbullying collected in partnership with the Siena College Research Institute, which found that the numbers here match up with the rest of New York state, in which 26 percent of teens surveyed reported being bullied online.

The organizations set out to understand how "good mobile technology can be used for bad," said Marissa Shorenstein, New York president of AT&T. "We felt it important to bring this issue to the forefront," she said.

Researchers surveyed a total of 1,255 teens and 1,048 parents Upstate.

The answers offer a clear picture of the digital world where teens are increasingly spending their time -- 87 percent of parents said their child has their own smartphone -- and are regularly exposed to cyberbullying.

Between a quarter to a third of teens confessed to their own experiences with occasional or frequent cyberbullying, while many more reported witnessing others, including their friends, being bullied online. Parents' answers reinforced those numbers.

Here are the reasons teens in Central New York teens gave for why they thought they were being cyberbullied:

Other interesting findings from the survey include:

One area researchers suggested for addressing cyberbullying is to bridge the disconnect between what teens are doing online and what their parents think is happening.

While 99 percent of parents say they've talked to their kids about online behavior and not to give out personal information and 35 say they set rules about technology, very few parents strictly enforce those rules. A third of teens said their parents are basically clueless about what they do online.

As part of the assembly at SAS, Jane Clementi shared the story of her son Tyler, who killed himself six years ago at 18 years old after his roommate at Rutgers University used a webcam to spy on him having sex with a man in their dormitory room. The roommate used social media to invite others to watch.

Clementi said the data showed how pervasive the problem is, and told teens they had the ability to prevent another tragedy like her family had suffered.

She and other organizers asked teens at Syracuse Academy of Science to "use social media for good" by posting selfies to social media with the hashtag #upstander.

Article by Julie McMahon |  on http://www.syracuse.com/schools/index.ssf/2016/11/cyberbullying_central_new_york_teens.html