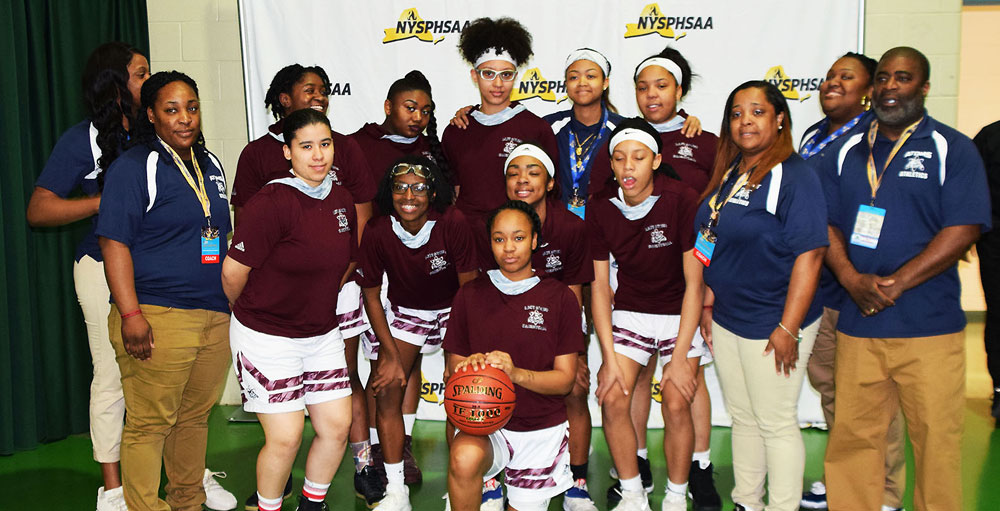 "It feels unbelievable," said Harris, who led all scorers with 20 points. "We worked so hard - day after day - it was all worth it. It feels so good."

"We just willed our way (to the win), said senior leader Lyrik Jackson, who scored 14 points, grabbed eight rebounds and made five steals for the Atoms. "Coach said keep pushing. We didn't want to go home."

SAS, which trailed by six points at the half (32-26) sparked its second-half offense with a pressing defense that forced Allegany-Limestone into 22 turnovers and yielded a dozen steals.

The #SASAtoms also held Gators' star senior center Morgan Davis to 14 points, about five below her season's average. Morgan only had six in the second half.

"Amazing. Just amazing," said #SASCS head coach Reggie Pickard. "I'm still kind of dreaming - like are we here or not, you know? We're doing everything possible to win a championship. We've worked hard for eight years, and here we are."

The Atoms trailed by as many as eight points late in the second quarter but caught the Gators just two minutes into the third using a press that started paying off in turnovers.

"Our pressure has been the key for us all year," Pickard said. "We force turnovers, make the game kind of ugly. I thought if we pressured a little more in the second half it would harder for them to get the ball to their bigs."

Allegany-Limestone, from Section VI near Olean, still led by two at the start of the fourth quarter, but SAS sophomore Xyel Bradford's 3-pointer put the Atoms ahead, 41-40, with just under 7 minutes left. Pierce hit another huge three with 2:30 left to play that gave SAS a 47-46 advantage.

But the Gators continued to make big baskets, too, and Allegany-Limestone had a 50-49 lead, and the ball, with just under a minute left to play.

On the in-bounds play, Harris dove for a steal and somehow got the ball to Pierce, who drove in for what would turn out to be the winning points, making it 51-50, Atoms.

The Gators began fouling, but Harris proved worthy against the pressure, hitting two sets for free throws in the final eight seconds.

"It was very nerve-wracking, but we do this all of the time in practice," she said. "I have to stay calm."

Allegany-Limestone coach Frank Martin said his team just couldn't quite hold it together in the final minutes against the SAS quickness.

The Atoms had a scare in the final seconds when Jackson took a shot to her head when she went down chasing a loose ball and an Allegany-Limestone player fell on top of her. She had to be helped off the court but was up and talking in the aftermath.

Harris said she hoped to go swimming in the hotel pool later in the day, but her coach wasn't hearing it.

No, no. We're not going to do any swimming," he said, laughing. "Too much muscle movement. They got mad at me last night because I took their phones from them. I'm doing that again tonight, too."