SAS Lady Atoms are the CHAMPIONS

Syracuse Academy of Science senior Lyrik Jackson insists that the Atoms are a balanced team, with no superstars.

But the all-state guard looked an awful lot like one midway through the fourth quarter of tonight's girls Class C basketball sectional final at Syracuse University's Carrier Dome.

Little Falls had whittled what once was a 19-point SAS lead down to eight points at the end of the third quarter.

Midway through the final quarter, the Mounties were still hanging around - down only 10 and threatening to inch closer. 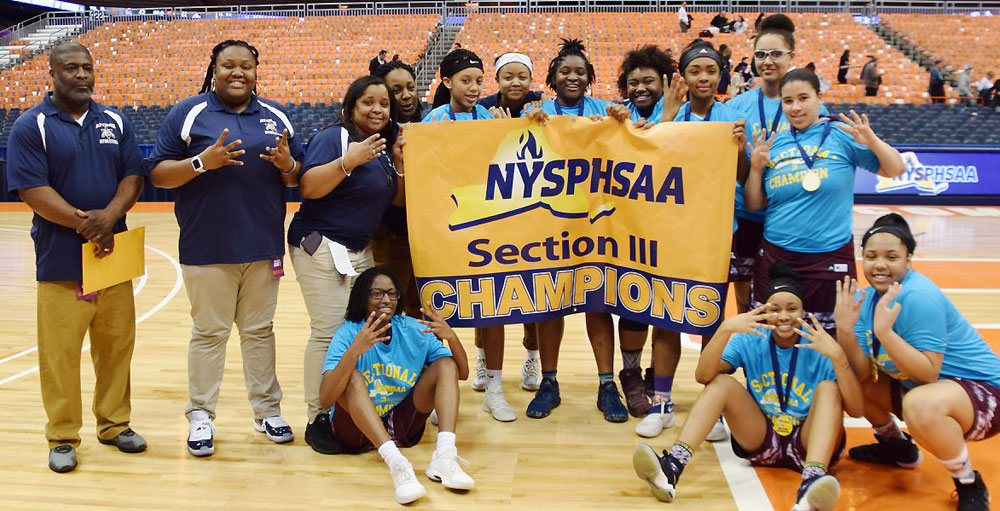 Jackson went to work. She canned back-to-back 3-pointers on consecutive possessions then, after a basket by fellow senior Diamonne Harris, Jackson scored a breakaway layup to put her team back in control with a 16-point lead and just over a minute left to play.

The fifth-seeded Atoms went on to a 63-42 victory over Little Falls to earn the first girls sectional championship in school history.

SAS is now 18-4 and advances to state regional play. The Atoms will face the Section IV champion on March 10 at a site in the Syracuse area.

It was a milestone win on a journey for SAS, and its coach, Reggie Pickard, that began in 2010-11 after the school put its first varsity girls team together.

Pickard and assistants Donniesha Terry and Rasheada Caldwell built a solid program that began winning more than it lost in the 2013-14 season.

Getting that championship proved a bit more elusive for the Atoms.

SAS earned berths in the sectional finals the past two years, but lost both times - to Cooperstown in 2015-16 and a three-overtime heart-breaker to Thousand Islands last March.

"We just told them we have to leave everything on the court," Caldwell said. "Just go out and do what we do. We're aggressive. We play hard. The girls really wanted this - especially losing last year."

This time, the Atoms prevailed.

But not before the Mounties from the Center State Conference II made SAS work a little.

Little Falls went on a 13-2 run in the third quarter to shave a 19-point SAS lead to just eight points, 40-32, after three quarters.

"My kids played with a lot of heart," Mounties coach Pam Munger said. "They put it out there in the second half. They could have walked away, they could have said they were done. They battled back. We got it to within eight. We just didn't have enough offense today."

SAS got 12 points from eighth-grader Alexius Pierce, Caldwell's daughter, and nine each from sophomores Freey Pleasants and Xyel Bradford.

"My teammates - it's all them," Jackson said. "They knew I was hot and they got me the ball - I've got to give them all the credit."

Despite Jackson's modesty, Caldwell said, she is a special player.

"We have a strong team this year, and all of our players can score," she said. "But Lyrik, she put the team on her back. She carried us. She's just one of those great players"

Pickard, who sent Caldwell out for the post-game interview while he stayed in the locker room for awhile, said it was hard to put his feelings into words.

"I'm overwhelmed," he said. "This is a big win, not just for SAS but for the whole community."